The authorities raid the parish church of Fr Jeewantha Peiris, who backed the protest movement in Colombo. The clergyman has been banned from leaving the country for allegedly participating in “illegal gatherings and damaging public property”. Arrests and intimidation against activists and journalists continue. For the Christian Solidarity Movement, peaceful dissent is essential to solve the current crisis. 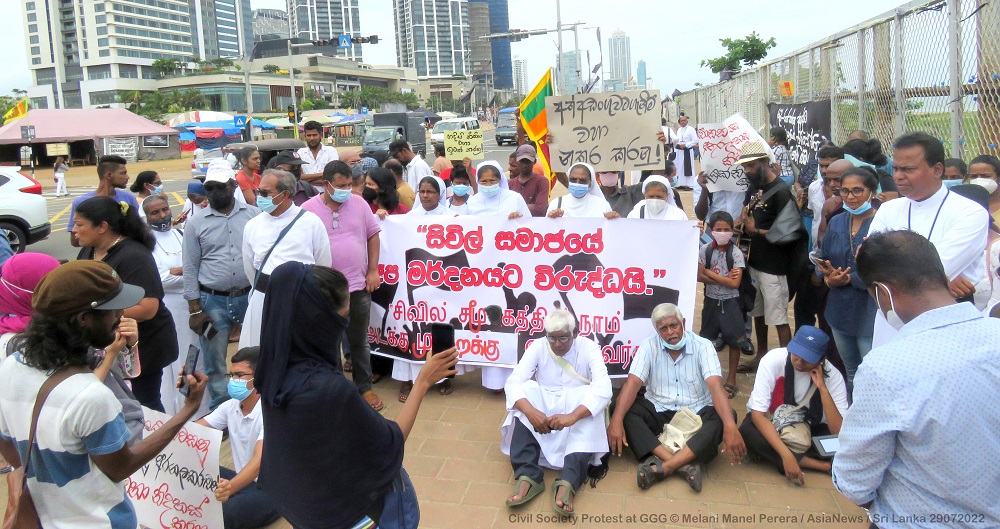 On Wednesday, police raided a church in Ratnapura, in Sabaragamuwa, a province in south-central Sri Lanka, looking for Fr Amila Jeewantha Peiris, a leading figure in the anti-government protest movement that developed since the country plunged into its current crisis.

Under emergency regulations, police can detain anyone up to 72 hours; this is unprecedented in Sri Lanka. For local human rights advocates and Church leaders, the police raid in Ratnapura is deplorable.

The raid came two days after a Sri Lankan court banned Father Peiris and five other people from leaving the country for allegedly participating in “illegal gatherings and damaging public property" during a protest rally in June.

On Tuesday, Dhaniz Ali, another activist involved in the Galle Face protests, was dragged out of a plane that was about to leave after he went through passport control.

On Wednesday, in broad daylight, men in plainclothes seized Veranga Pushpika, a protester and journalist, as he travelled on a bus. Four protesters, who had handed over large sums of money found in the President's House to the police, were also arrested.

On the same day, people in plainclothes claiming to be policemen visited the offices of Xposure News, an agency that covered the protests extensively, demanding the identity of people in photographs and access to CCTV footage.

“We strongly urge the government to respect the people’s freedoms enshrined in the country's constitution,” reads a statement by the Christian Solidarity Movement (CSM). “[We] remind the Government that Sri Lanka is a signatory to the UN declarations on human rights.”

CSM goes on to say that, “In the face of unprovoked violence and illegal or extra-legal attempts to arrest these protesters, we will use every legitimate means available to us to make the country and friends of Sri Lanka abroad aware of these violations. [. . .] Peaceful dissent is essential to sustaining democracy and, in the context of the current crisis, international credibility.”

Last but not least, “The Sri Lankan state and the Wickremasinghe government must immediately cease the attacks on protesters and civic activists and those perpetrating violence against protesters should be held to account.”

On 23 July, the Catholic Bishops' Conference of Sri Lanka also issued a statement, forcefully condemning the attack that took place a day earlier against unarmed civilian protesters and journalists, noting that the suppression of human rights "will further exacerbate mass unrest and damage the image of the country in the international community.”