The Maronite Church is determined to defend her rights after the archbishop of Haifa and the Holy Land was arrested for bringing money and medicines donated by families separated by war. The accusations of ties with Israel over an exclusively humanitarian action are bogus. The solidarity of the Latin Patriarchate of Jerusalem is necessary to maintain “the presence of Christians in the Holy Land” and “their solidarity with the Christians of the Middle East”, writes Archbishop Pizzaballa. 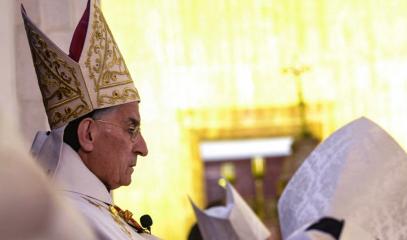 Beirut (AsiaNews) – The confrontation between the Maronite Church and Hezbollah shows no sign of abating, following the arrest a week ago of Maronite Bishop Moussa el-Hage of Haifa and the Holy Land by the General Security in Ras Nakoura.

The prelate was making his monthly visit to Lebanon, bringing money and medicines to dozens of families separated by war on both sides of the border with Israel.

“What happened is an insult to the Maronite Church, to the patriarchate, and to me personally,” thundered Cardinal Bechara al-Rahi on Sunday, in front of a crowd of faithful and supporters who came to back him at the summer headquarters of the Maronite patriarchate in Dimane, northern Lebanon.

The Maronite patriarch slammed a political system set up by the pro-Iranian party, with the active and passive complicity of the Free Patriotic Movement (CPL) founded by President Michel Aoun, and currently led by his son-in-law, Gibran Bassil.

Patriarch Al-Rahi warned that Lebanon was turning into a "police state”, an inquisitorial state in which everyone snoops on everybody amid suspicion and widespread rumours.

Using Israel and solidarity with the Palestinians as a pretext to justify the arrest of a bishop and block humanitarian aid brought to Lebanon is an attack on a long-established right, not only by the Maronite Church, but also the Greek Catholic Church, which also has a bishopric in Haifa.

On Sunday, the patriarch stressed again that the Maronite Church is the victim of political intrigue, noting that questioning a bishop is a serious violation of the principle of legal autonomy enjoyed by the Church and recognised in law.

In any case, the patriarch added, "it is in the national interest of Lebanon" and of Christians in particular, that the Maronite community and people of Lebanese origin in the Holy Land continue to communicate with the wider Arab world to which they belong.

This position is in line with the view expressed by the Latin Patriarchate of Jerusalem. In a statement, Archbishop Pierbattista Pizzaballa, says that it is necessary to maintain “the presence of Christians in the Holy Land,” and “their solidarity with the Christians of the Middle East.”

The prelate also notes: “We are fully in solidarity with Bishop Moussa El Hage in the work of charity that he has been carrying out generously, for a long time, bringing regularly material aid and medicines collected by benefactors in favor of poor Lebanese families of all religions, Christians, Muslims and Druze, who are in great difficulty due to the severe economic crisis that Lebanon is currently going through. We fully support the statement made by the Maronite Patriarch in this regard.”

This message of solidarity from the Church of the Holy Land to the Church of Lebanon is fundamental. It may be possible that some of the recipients of the aid that Bishop Moussa el-Hage was bringing might be “agents” but this must be understood as the “exception that proves the rule" and must be treated on a case-by-case basis, Church sources say.

By contrast, banning humanitarian transactions between Israel and Lebanon represents a form of collective punishment for Lebanese forced by events to live in Israel (some arrived as children with their parents) and Maronite communities in the Holy Land.

In his address on Sunday, Patriarch Al-Rahi was determined to challenge what he considers “political” bans, stressing that he would not be intimidated and that he will carry out the mission of the Maronite Church.

Finally, the Church wants the return of the “booty” of 460,000 dollars, 4,000 euros, and medicines seized by the Military Court. In an Eastern society steeped in religious principles, taking such money and medicines, seizing them, is an offence to God before it is an offence to humankind.

The money belongs to the poor; it is the alms that every believer, Christian or Muslim, offers for the benefit of their own and those in need. At a time of hardship, shortages, and deprivation, not returning them would mean depriving the poor of sustenance. Yet nothing has been done so far to ensure that what was seized is returned to its rightful owner.

Israel holds some 800 Palestinians under administrative detention, most of them since 2008