Muslims reopen a Tizi-Ouzou church, closed by the authorities

For the first time in contemporary Algerian history, Muslims support Christians. The popular movement remains united against the regime’s deceptions. Since January 2018, the authorities have put seals on 15 Christian places of worship. 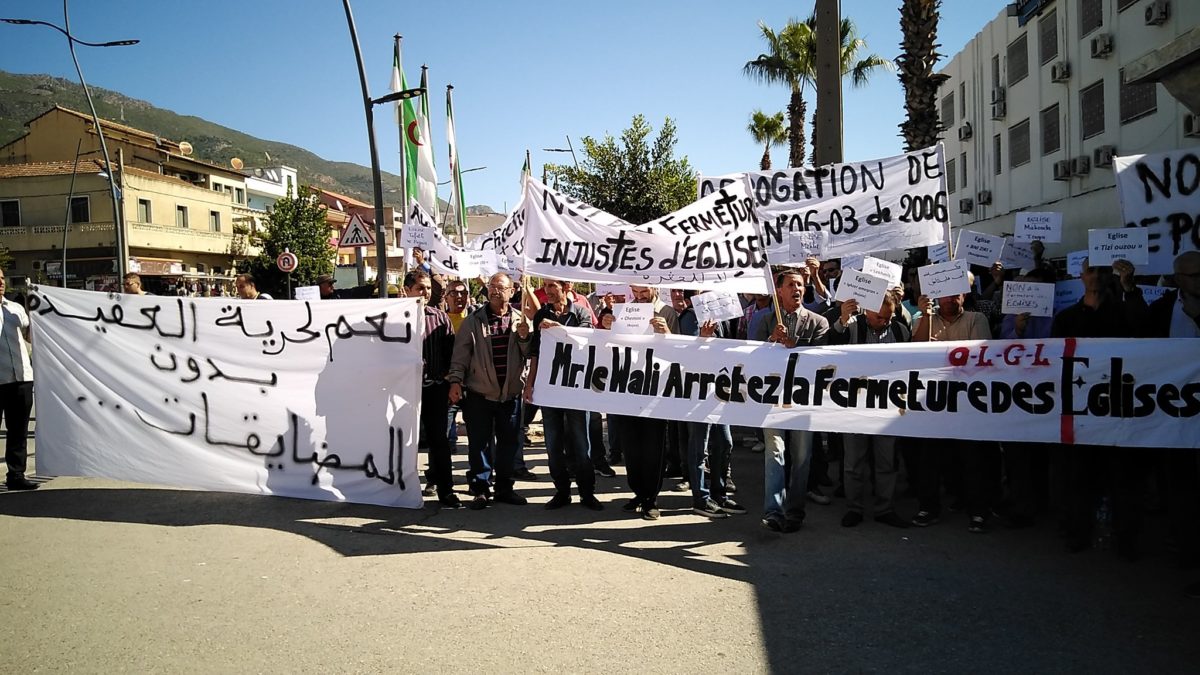 Paris (AsiaNews) – Last Thursday morning, Algerian authorities put seals on the largest Protestant church in Algeria. The decision was made by the head of the Tizi-Ouzou (Tizi Wezzu) wilaya (prefecture) who in the recent past also attacked Ibadite Muslims in Ghardaïa (Taɣerdayt) in southern Algeria.

Since churches opened, they have never been a problem, especially in this region known for its tolerance towards all beliefs. So, right after the start of the crackdown, Christians organised a sit-in in Tizi Ouzou to protest against the church closing. The sit-in was met with more repression, including the arrest of at least seventeen Christians.

Arbitrary closures and arrests have real political aims. Under Algeria’s regime, nothing is done randomly! Given the events in Algeria since 22 February of this year and the determination of the Algerian people to get rid of the hybrid dictatorship that has ruled the country since independence, nothing could be clearer! What does this regime seek by focusing on religious issues and freedom of conscience amid a popular revolution? This is the question sparked by church closures in Tizi Ouzou and the arbitrary repression the Christian community is subjected to.

Algeria’s political regime, faced with a grassroot movement for nine months, has tried, is trying and will try diversionary strategies to split the strong popular protest movement. Playing with cultural, religious and identity sensitivities is its favourite sport. After the ban on the Berber cultural emblem and the vain attempt to use religious speech in mosques, today it attacks the Christian community! In other words, this regime is maliciously exploiting everything it can to remain in power. Divide and rule is the only motto recognised by Algeria’s military regime!

However, "the wind is turning," and Algerian society, like other societies in the world, is changing. It changes, realises, integrates new ideas and gets rid of those that are no longer valid. For the first time in the contemporary history of Algeria, Muslim citizens have reacted and supported Christian citizens. From early morning, lawyers have become involved, and their trips to police stations have borne fruit. All Christian detainees were released. In the afternoon, Muslims, in a a sign of solidarity and awareness, reopened the closed church.

Indeed, ordinary citizens understand the regime’s Machiavellian manoeuvres. "We will not forget the main demands of the People's Revolution; we will not accept to deviate and focus on other business. At the same time, we have no right to be fooled by the actions of those in power who deprive our fellow Christian citizens of their right to individual freedom and worship,” political activists announced on their Facebook page.

This view is revealing and such ideas should be adopted by all Algerians because we must create a State where all citizens are equal, regardless of their religious beliefs. This State must ensure and guarantee individual freedoms. That is why Algerians are still taking to the streets with the aim of establishing the rule of law.  And today (18 October) was the 35th Friday of the popular uprising against those who ruined the country, fuelled fundamentalism and sowed division among the children of the same people.

See also
Four Algerian Christians convicted for setting up a place of worship without a permit
13/12/2010
Four churches closed in recent months in Algeria
18/04/2018 17:39
Algiers closes another two churches: the reasons are still unknown
17/10/2019 10:53
Authorities block Christian man’s disability pension, killing him and his children
07/06/2018 14:59
Christians and Muslims from Algeria to Italy in the footsteps of Saint Augustine
13/08/2010

Riyadh, 34-year jail term to student for a tweet. Record number of executions.