Pope: colonialism still exists, and stateless Rohingya are an example of that

During the press conference on the return flight from Canada, Francis warned that even today the cultures of some peoples are considered inferior. He confirmed plans to visit Kazakhstan in September. In his last stop, just 300 kilometres from the Arctic Circle, he advised young Inuit to “Keep walking upwards,” towards the light, separating what is true from what is false. “Be part of a team.” 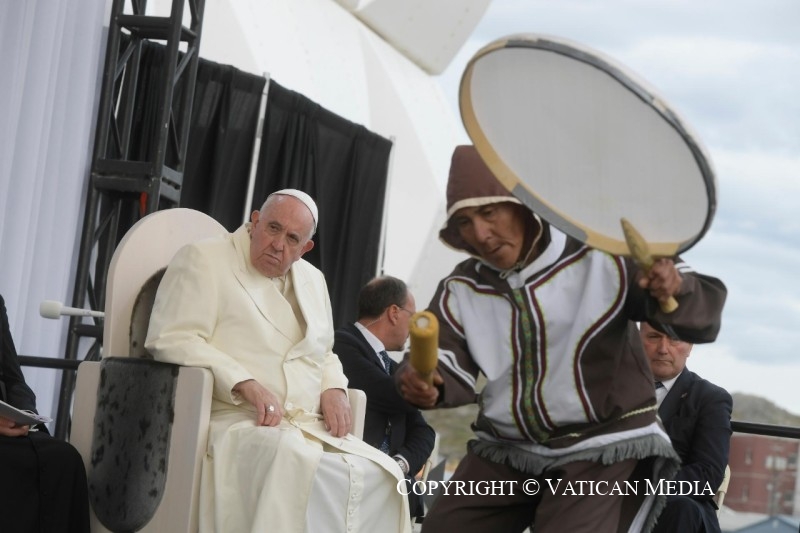 Vatican City (AsiaNews) – Pope Francis concluded his apostolic journey to Canada today. During his return trip to Rome, he answered a question about the “doctrine of discovery” by an Indigenous Canadian journalist. A banner raised in Quebec City by Indigenous representatives had expressly asked him to condemn it.

“[E]ven today the same colonialism exists,” he said. Perhaps “in the unconscious there is still something. We have, allow me to say it, a somewhat colonialist attitude of reducing their culture to ours.”

Speaking about the call for forgiveness in connection with forced assimilation, which was the main theme of the entire trip, the pontiff noted that, “We must go back and heal the evil that was done”. Yet, “even today the same colonialism exists. [. . .] Take the case of the Rohingya, in Myanmar: they are considered inferior, they have no right to citizenship. Even today.”

“Some bishops told me, ‘Our country, when it asks for credit from some international organisation, they impose binding colonialist conditions that make you change your way of life a little bit."

During the flight, asked several times by journalists about his possible resignation, Francis said: “The door is open, it's a natural option, but until today I haven't knocked on that door. I haven't thought about that possibility. But that doesn't mean that the day after tomorrow, I won't start thinking about it, right? But right now, sincerely, it is not [in my mind]. The Lord will decide.”

Speaking about his health, the pope ruled out further surgery. “The specialists say yes, but there is the whole problem of anaesthesia. Ten months ago, I underwent more than six hours of anaesthesia, and there are still traces.”

With respect to future trips, he said: “I would like to go to Kazakhstan (in September). That wouldn't be too rigorous of a journey. There wouldn't be a lot of movement. There is a congress of religions. But for the moment, everything remains as is.

“I also need to go to South Sudan, even before going to the Congo, because it would be with the Archbishop of Canterbury and the Bishop of the Church of Scotland, [. . .]  Then [there is] Congo, but that will have to be next year, because of the rainy season. We will have to see... I have all the good will in the world, but let's see what my leg says.”

After meeting privately at an elementary school with some former students of residential schools and renewing the request for forgiveness for the violence suffered, the pontiff devoted his last address to young Inuit.

As an older brother, “I would like now to address you, Inuit youth, the future of this land and the present of its history,” he said. “It is not enough to live off the past, it is necessary to earn what was given to you as a gift.”

To assert his point, the pope gave three pieces of advice. “The first is: Keep walking upwards. [. . .] Friends, you were not made ‘to get by’, to spend your days balancing duties and pleasures; you were made to soar upwards, towards the most genuine, true and beautiful desires that you cherish in your hearts, to love God and to serve your neighbour. Don’t think that life’s great dreams are as unattainable as the sky above.”

Of course, in life you always meet those who try to dampen dreams: “How can I ‘soar’ in a world that seems constantly to be dragged down by scandals, wars, fraud, injustice, environmental destruction, indifference towards those in need, disillusionment from those who should be giving an example? Faced with these questions, what is the answer?

“Here is what I would tell you: young people, you, my brother, and you, my sister, you are the answer! Not just because once you give up, you have already lost, but because the future is even now in your hands. The community that gave you birth, the environment in which you live, the hopes of your peers, of those who, without even asking, expect from you the irreplaceable treasure that you can bring to history”.

The second piece of advice is “Come to the light. [. . .] For there is a daily clash between light and darkness, which does not take place somewhere out there, but within each of us. To follow the way of light requires courageous and heartfelt decisions to resist the darkness of lies.”

But where do we start to distinguish them? “You can start by asking yourself: what are the things that first strike me as glittery and seductive, but then leave me with a feeling of deep emptiness? That is the darkness! What, on the other hand, is good for me and leaves a feeling of peace in my heart, even if it first calls me to give up certain conveniences and to master certain instincts? That is the light!”

Distinguishing light from darkness within us is the true face of “Freedom,” which “along with life, is the greatest gift that our heavenly Father has given us", but “Freedom does not mean doing everything I want and acting as I please. Freedom is not about what I can do in spite of others, but what I can do for others. Freedom is not total caprice, but responsibility.”

And finally, as the third and last piece of advice, Francis urged Inuit youth to “Be part of a team”, noting that “Young people do great things together, not alone”, like local ice hockey champions. Indeed, in this sport, “team spirit always makes the difference; [. . .]; you have to move together, to have the patience to practise and carry out complicated plays. Teamwork also involves making room for others, dashing out quickly when it is your turn and cheering on your teammates.”

Last but not least, “by listening to your elders and drawing from the richness of your traditions and your personal freedom, you will embrace the Gospel preserved and handed down by your ancestors, and thus come to see the Inuk face of Jesus Christ”.

As the economy nosedives, human trafficking resumes in Negombo