China’s currency has appreciated by more than 5.3% against the US dollar since July 2005 and it is poised to become more profitable than Hong Kong’s currency. There are concerns about the city’s economy and about an increase in local inflation. 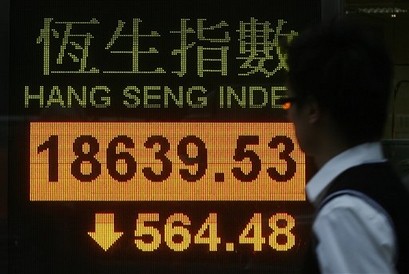 Beijing (AsiaNews/Agencies) – The Chinese yuan hit a new high yesterday when it reached an exchange rate of 7.8226 yuan to one US dollar. The Chinese currency now has the same value as the Hong Kong dollar and its appreciation is expected to continue.

Paul Gruenwald, Hong Kong representative at the International Monetary Fund, yesterday spoke out to calm the city and its markets. He reiterated that the local currency remains “strong” and that the Fund “strongly supports the authorities” of the city. Gruenwald excluded the threat of serious consequences for markets and the global economy although he did admit that increased local inflation –currently around 2% – should be expected. The municipal government must now decide whether to readjust the currency, something that may however lead to more inflation and serious psychological reactions, showing that the local currency must follow the progress of the renminbi.

For years, the United States has accused Beijing of keeping the exchange rate low to favour its exports, so experts believe the Central Bank is for this appreciation as a sign of “goodwill” in view of the imminent visit of Henry Paulson, US Treasury Secretary.

Meanwhile, there is the risk that the current relationship between Hong Kong and neighbouring Shenzhen may change and even reverse. In Shenzhen (Guandong), the Hong Kong dollar has always been preferred as a strong currency and it circulates freely. The city has always been a traditional destination for Hong Kong businessmen and consumers, and thousands pass through the customs points at Lok Fu and Huanggang every day. Many employees in Shenzhen receive their wages in Hong Kong dollars. It is estimated that visitors from Hong Kong spend more than 30 billion HK dollars every year (812 million US dollars).

But now more and more shops are refusing to accept the Hong Kong currency for fear that it will devalue compared to the RMB and many traders have already revised their exchange rates, valuing 100 HK dollars at no more than 95 yuan. For now, analysts say, the influx of Chinese from Hong Kong has not diminished: they come to Shenzhen over the weekend and during the holidays to eat and to shop, not least because prices are cheaper. But some do not exclude the possibility that soon there will be a reverse influx, if revaluation of the RMB makes prices in Hong Kong worthwhile.

Guo Shipin, economic consultant of Shenzhen’s town government and dean of the local university’s finance department, said that the Shenzhen economy had not yet been affected because fear of a further yuan appreciation had prompted Hong Kong residents to invest in real estate and other financial sectors.

According to statistics from Shenzhen customs, the amount of yuan exported to Hong Kong decreased by 90% in the first half of 2006 in comparison with the same period last year. Meanwhile, 460 million yuan more than last year were exported from Hong Kong.

See also
Hong Kong - Shenzhen stock connect launched
05/12/2016 09:37
Tighter controls introduced to prevent speculation on the yuan
07/08/2008
As the world waits for hyperinflation and a world government, Bernanke becomes “Person of the Year
29/12/2009
“Hightened concerns" about growth in China among the reasons for the Fed zero rate
18/09/2015
Beijing devalues yuan once again amid fears for global stock markets
12/08/2015